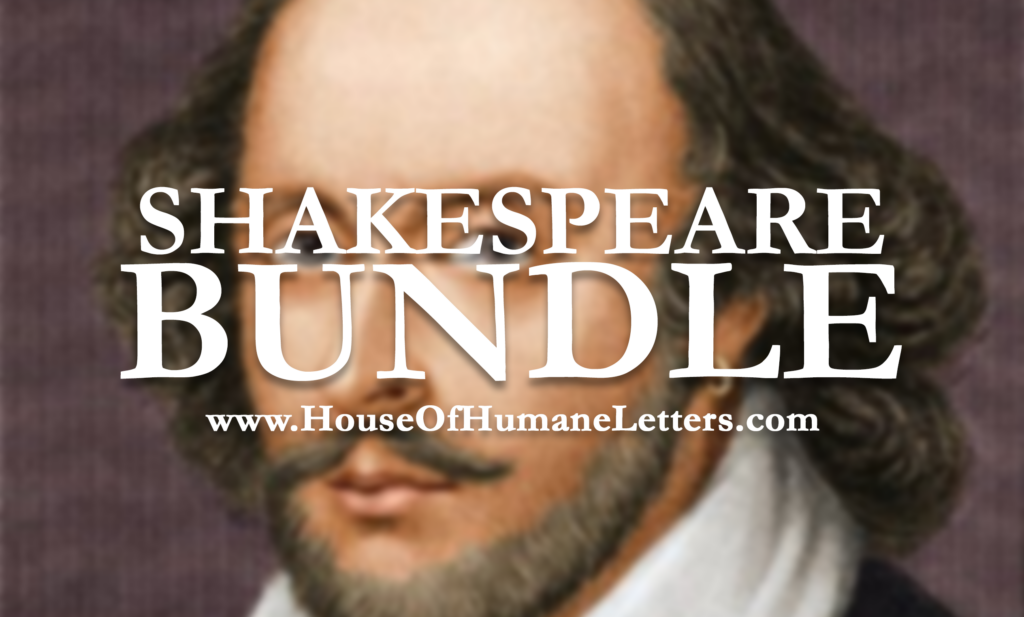 Combination of our Shakespeare mini-class and webinar recordings including:

As You Like It: A Shakespeare Webinar by Kelly Cumbee 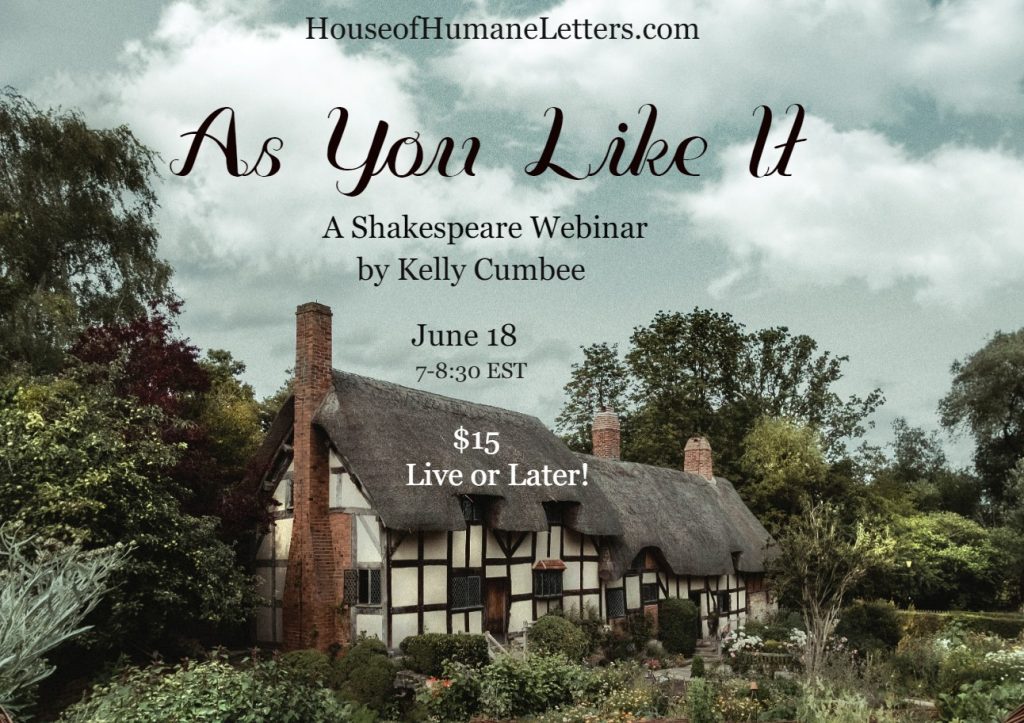 C.S. Lewis says that reading old literature is a lot like visiting a foreign country and that there are two ways to experience it. You can travel as a tourist taking in the sights, or you “can eat the local food and drink the local wines, you can share the foreign life, you can begin to see the foreign country as it looks, not to the tourist, but to its inhabitants. You can come home modified, thinking and feeling as you did not think and feel before.”

In order to help you experience Shakespeare’s comedy As You Like It in that second way, Kelly Cumbee will introduce you to the metaphors and imagery that formed the landscape of the Elizabethan imagination. She will also help you recognize the structure, contents, and stock characters that an Elizabethan audience would have expected of a Comedy, and will touch on the Pastoral Romance which inspired this play. 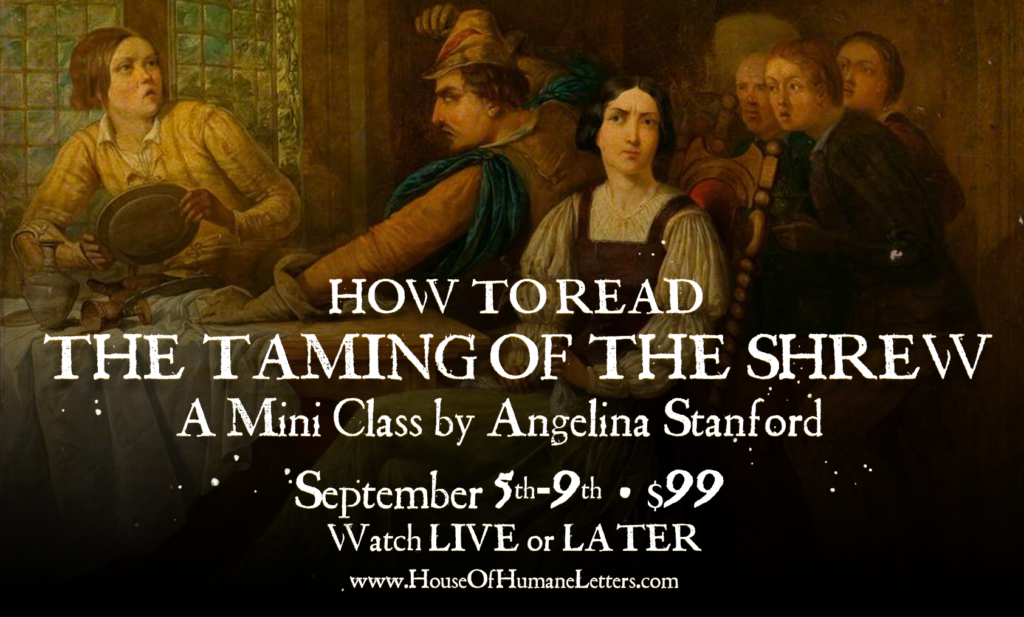 The Taming of the Shrew may be Shakespeare’s most misunderstood play! Angelina Stanford will lead you through Elizabethan Cosmology, the form of the play, the tradition of the taming of the shrew stock plot, the sources of the play, and much more so that you too can read the play as the original audience understood it.

Discover how this play is NOT about what you think it is and learn how to read Shakespeare within the literary and intellectual tradition that opens up all his plays.

This is a five session intensive class, complete with discussion forum. Reading schedule and source materials will be posted on Canvas. Please read this short play once through before the class begins. 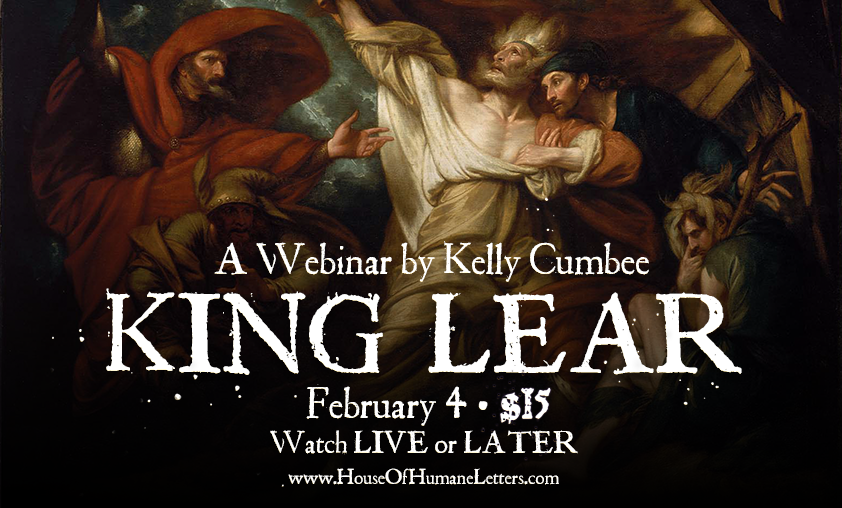 King Lear is one of the darkest and most violent of Shakespeare’s tragedies, but just as the lightning flashes through the storm on the heath, there are moments of sublime beauty in this bleak play. Kelly Cumbee will help you enter the Elizabethan imagination so that you can see not just the madness of King Lear and the chaos created by his abdication, but the light and hope embedded in this masterpiece, this “fierce dispute, / Betwixt damnation and impassion’d clay.” 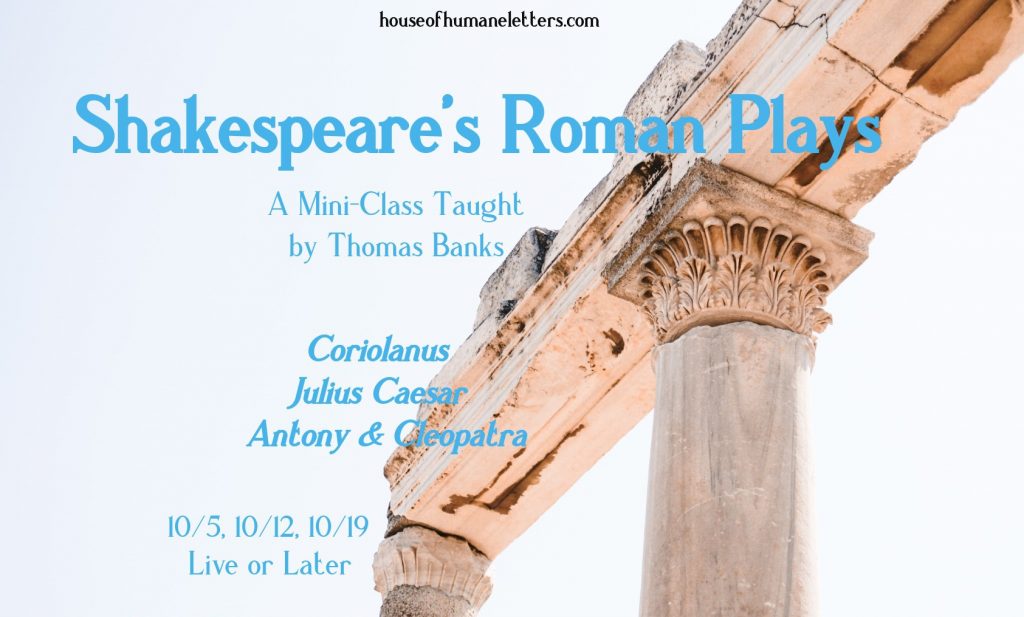 Shakespeare’s three great Roman tragedies remain definitive representations of political power, tyranny, anarchy, unrestrained passion, and the corruptibility of men. Join classicist Thomas Banks this October for his three-session short class on Shakespeare’s Romans; enjoy the supreme excellence of Shakespeare’s dramatic verse; discover the historical basis of the three plays in the writings of Plutarch; and enter into the world of Coriolanus, Caesar, Brutus, Antony and Cleopatra.

The Henriad: Shakespeare on War Webinar by James Banks 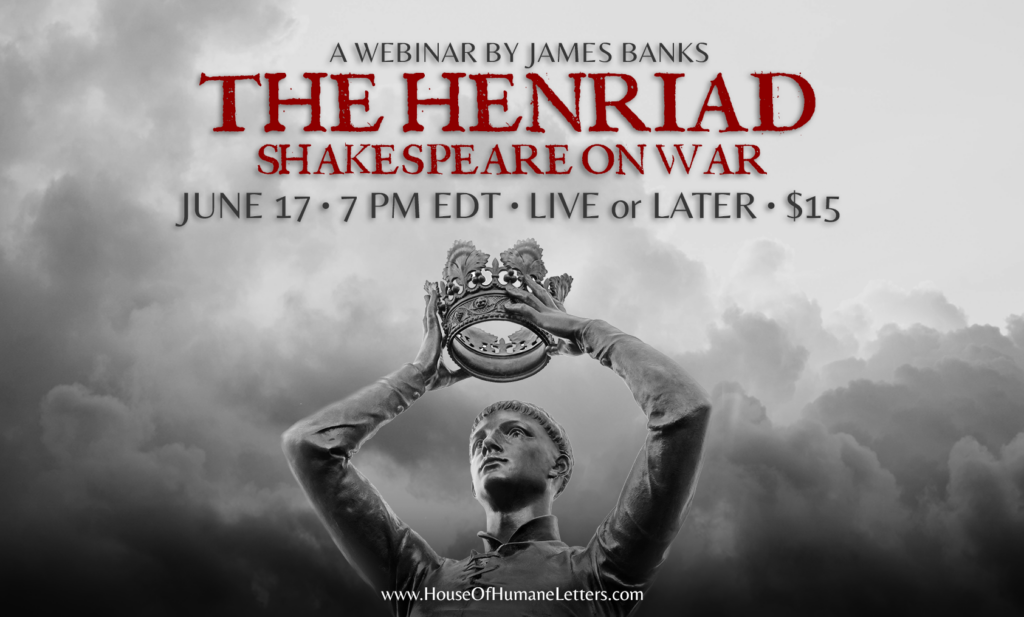 In 1944, when Allied troops were jumping behind enemy lines and disembarking under heavy fire on Normandy’s beaches, a film unit from the British Ministry of Information, on orders from Prime Minister Churchill and led by Sir Lawrence Olivier, was producing a film which was meant to boost the soldiers’ morale. However, unlike many other propaganda films of the same era, this one was adapted from a play written by a man who had died three centuries before. Why was Shakespeare’s Henry V so resonant with the playwright’s countrymen so long after his passing, and why was there so much in the work that the filmmakers felt obliged to leave out?

Join James Banks as we journey through William Shakespeare’s Henriad trilogy (Henry IV, Part I; Henry IV, Part II; and Henry V)–a journey which will take us from the streets of London to the fields of France and give us insight into Shakespeare’s view of war, which he portrayed both from the vantage of the head that wore the crown and from the perspective of those who were “base, common and popular”. Meet Henry, Falstaff, Hotspur, Bardolph, Mistress Quickly and Ancient Pistol and learn why, three hundred years after his death, Shakespeare still had so much to say.

The Tempest Webinar by Kelly Cumbee 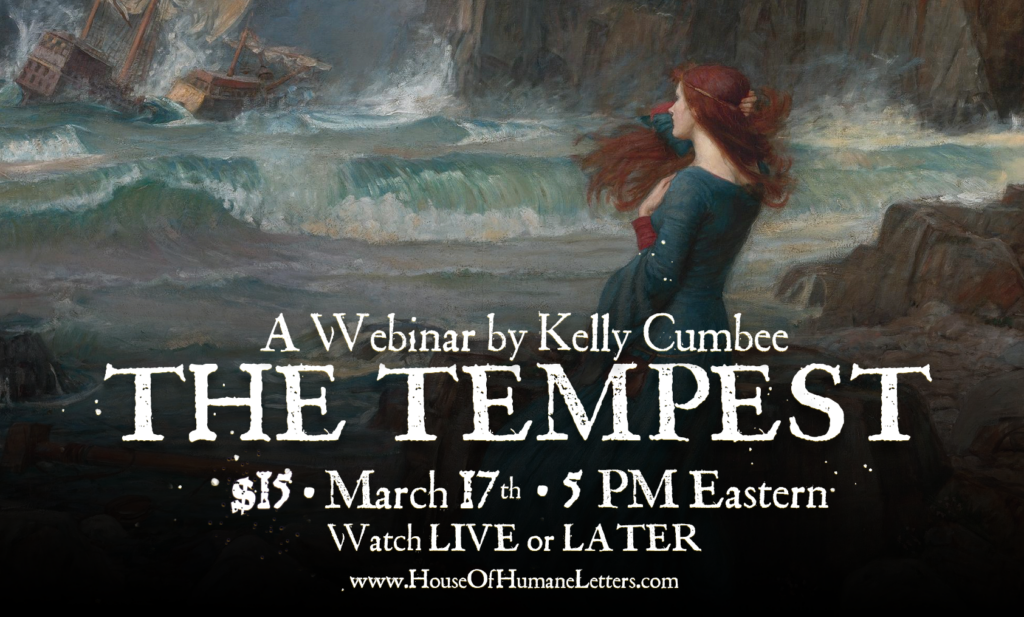 Storms and time. The sea and the soul. Dreams and imagination.

Shakespeare’s last play is one of only two with a plot that’s original to him. In this webinar we will explore the author’s inspiration, discuss the original audience’s expectations, and find the harmony in this tale of vengeance and love.

Be the first to review “Shakespeare Bundle” Cancel reply