View cart “The Poetry of Advent Webinar (Streaming Video)” has been added to your cart. 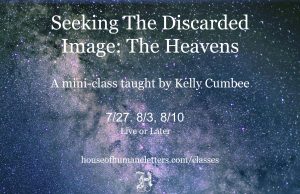 Note: This class is completed, but you may work through the course at your own pace. After you purchase the class, you will receive a link to the virtual classroom.

Be the first to review “Seeking the Discarded Image: The Heavens (a mini-class by Kelly Cumbee)” Cancel reply